Get ready to experience a real slice of musical history and heritage from those who keep the flame of Bob Marley burning strong as The Wailers head to Australia this April.

When Bob Marley instructed ‘Familyman’ Barrett to ‘keep The Wailers together’ he made it his life’s dedication.

Performing songs from Legend – the best selling reggae album of all time, spending 992 weeks on the Billboard Charts – as well as all the huge hits from Bob Marley’s incredible back catalogue; The Wailers conjure the spirit of reggae and the essence of the 70s rebellion performed by the people who helped forge the era-defining sound and by those raised under their tutelage.

Experience a real slice of musical history and heritage from those who keep the flame of Bob Marley burning strong.

Get down for a long lazy afternoon of good vibes as The Wailers present Triffid Reggae Day!
Featuring free reggae DJs in the courtyard to get you in the mood with guest artists Bobby Alu and The Lyrical on the mainstage before The Wailers bring the house down!

Amidst smooth harmonies, rhythms inspired by a strong family lineage of Polynesian performance, and unassuming grooves that work a gradual, smile- inducing high through even a casual listener, Bobby Alu tunes have a way of sneaking into the subconscious and taking up residence. Every now and then, one will pop up as a toe-tapping reminder to take it slow, enjoy the ride. It’s the curator of calm’s way – deliver island-time vibes with gentle optimism rather than forceful instruction, and encourage the type of reflection best achieved in a hammock. Though it’s not all palm trees and daydreams – there’s a robust energy in Alu’s mastery of traditional Samoan log drums, and a vitality to his songwriting that nods to world, roots and pop intelligence.

Since topping the charts on Triple J’s Unearthed for the seventh time, The Lyrical has become THE rising star of the music scene on the Sunshine Coast. The Queensland North Coast has always been Australia’s hotbed for new talent in a variety of genres and the hip hop-reggae scene is no exception to that tradition. Following in the footsteps of Ben Harper, Bob Marley, Michael Franti and Xavier Rudd, The Lyrical reflects the ingenuity and musical aptitude it takes to be a great artist. 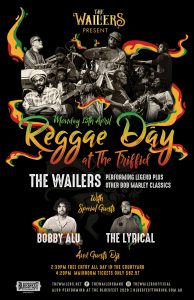 By signing up to our database you agree to the following Promoter (Bluesfest Touring: ABN 57 146 130 485) terms and conditions: When subscribing you are agreeing to receive correspondence from Bluesfest Services Pty Ltd and associated entities, including information regarding Bluesfest, Bluesfest Touring and Boomerang Festival.